Overall Objective – To develop the pedagogical approaches in PE lessons

At Stone St Mary’s C.E. Primary School, our children partake in an inspiring and creative curriculum in all subjects, allowing them to develop knowledge, skills, and enthusiasm. This is applied to our PE curriculum to ensure that all our children leave Stone St Mary’s physically educated along with the knowledge, skills, and motivation needed to equip them for a healthy, active lifestyle and participation in physical activity and sport. Our children have many opportunities to find their sport and represent our school in a wide range of competitions, opportunities and after school clubs. Our vision and values within our school are linked to our overall teaching of PE, ensuring collaboration, perseverance in a caring environment where knowledge and skills can grow.

Below are our expectations for the end of each key stage:

Below are some links that you may find useful to use at home:

For P.E. the children need black shorts or black joggers/leggings, a t-shirt in the colour of their house and trainers. Black joggers and t-shirts/polo shirts can be purchased through the School Uniform shop, which have the school logo embroidered on.

Children can wear their school jumper or a black hoodie too in the winter months.

At Stone St Mary's we offer a range of extra-curricular activities for our children to take part in, such as:

To celebrate the Beijing 2022 Winter Olympics and Paralympic Games, we took part in the virtual bound for Beijing challenge. This challenge encouraged all of our children and staff to get active and log their activity on the website.

As a school we logged over 799 activities, which took place over 5,848 hours! 😅 The most popular activities amongst here at Stone were: ball games, walk and run and playground!

On Friday 16th October, as a school we took part in One Run Global Schools Day, which 132,202 pupils took part in from 54 countries. We needed to be active for 15 minutes on this day - some of us completed the mile, whilst some of us had a boogie! 🩰🕺💃

Check out the map to see where these other countries are Schools Map | One Run.

On Tuesday 12th October, 10 of our year 5 and 6's represented Stone St Mary's at a tournament of schools in the Dartford area.

The boys were terrific! They played really well and had amazing sportsmanship too. Unfortunately, the boys lost - but they haven't let this affect their attitude to the next match!

On Wednesday 13th October, 10 of our year 5 and 6's represented Stone St Mary's at a tournament of schools in the Dartford area.

The girls were amazing! They out did themselves by playing really well played really and having amazing sportsmanship too. To our shock, the girls won in our group! 🎉🎉 We were invited back on Friday 15th October, to play for the trophy!

Back we go to Princes Park, to see if we could win the trophy. The girls were determined and tried to not let the defeats let them down.

The girls came 6th out of 31 schools who took part - I'm super proud of the girls!

On Wednesday 13th October, after school, 8 of our year 5 and 6's took part in a Netball tournament held at St George's Secondary School.

This was their first match after two years and some of them had never played Netball before.

They were fierce and determined to have a go and try their best.

Unfortunately, we came 5th out of the five schools - but there is always next time.

On Wednesday 15th December, 10 of our year 5 and 6's represented Stone St Mary's at an away football match at St Paul's.

With a nail biting first half - pausing at 1-1, it all came down to the second half!

The girls were amazing, and showed incredible sportsmanship towards the other school.

Stone won the match, with a second goal being scored in the second half!

Well done girls! Here is to our next match next term!

On Monday 7th February, our year 5/6 football team took part in our next FA football match against Temple Hill.

We won 5-1 and are looking forward to our next match.

On Wednesday 2nd March, eight of our year 5's represented the school at a football tournament at Invicta Grammar School in Maidstone.

The team were amazing, and demonstrated all of the values of sport! They showed real determination and worked well as a team, which saw them win many of their games.

They were shocked to discover that they were in the semi-final and then into the final!!

The team came second overall in the competition - super proud of each and everyone of the year 5's that represented Stone!

The team showed great sportsmanship and real passion for the game of football, which saw us in the final - Stone St Mary's vs Hextable!

Unfortunately, it came down to penalties and we lost! What an achievement to come 2nd out of the 10 schools that played! 🥈⚽

Thursday afternoon, our year 5/6 girls football team played against Sedley's in the FA Cup Quarter Final here at Stone St Mary's. After the whistle blew for full time, the score was still nil - nil. Our girls had great possession over the ball and even tried several times to score.

Then, we came to penalties! After a few tries (from both sides), our goalkeeper scored a goal and we were ecstatic! Although, Sedley's scored straight after us! And this point the crowd is nervously jumping up and down as the score is even. Then Sedley's scored! Sedley's will be in the semi-final in May.

Our girls were fantastic and showed the vision of the school and values of sport throughout the match. Well done to each and everyone of the girls who has been a part of the football tournament.

Friday, after school, saw 10 of our year 5/6's play at Holy Trinity. They were all super excited and proud to be representing the school in this match. The boys had great communication on the pitch and excellent sportsmanship! Stone won 2 - 1 ⚽⚽

As part of the Birmingham 2022 Commonwealth Legacy Programme, twelve of our year 3 and 4's are learning new skills to play Bowls. Friday saw them take on their first lesson at Stone Lodge Bowls Club. They are all super excited to go back next week to continue to learn - even Mrs Wilcox and Mr Sayers are loving learning how to play Bowls!

Thursday afternoon, the girls football team took part in a match against Temple Hill. With the sun beaming down, the match started. Stone had great possession of the ball and their teamwork was fantastic! In the first half, Stone scored - with the crowd cheering in celebration!

The whistle blew and the cheerleaders (in the form of the year six boys) ran onto the pitch in celebration. Both teams showed great teamwork and sportsmanship during the match.

Shout out to Ashley, Archie, Ollie and Samuel for being the best cheerleaders, linesmen and coaches for the match! 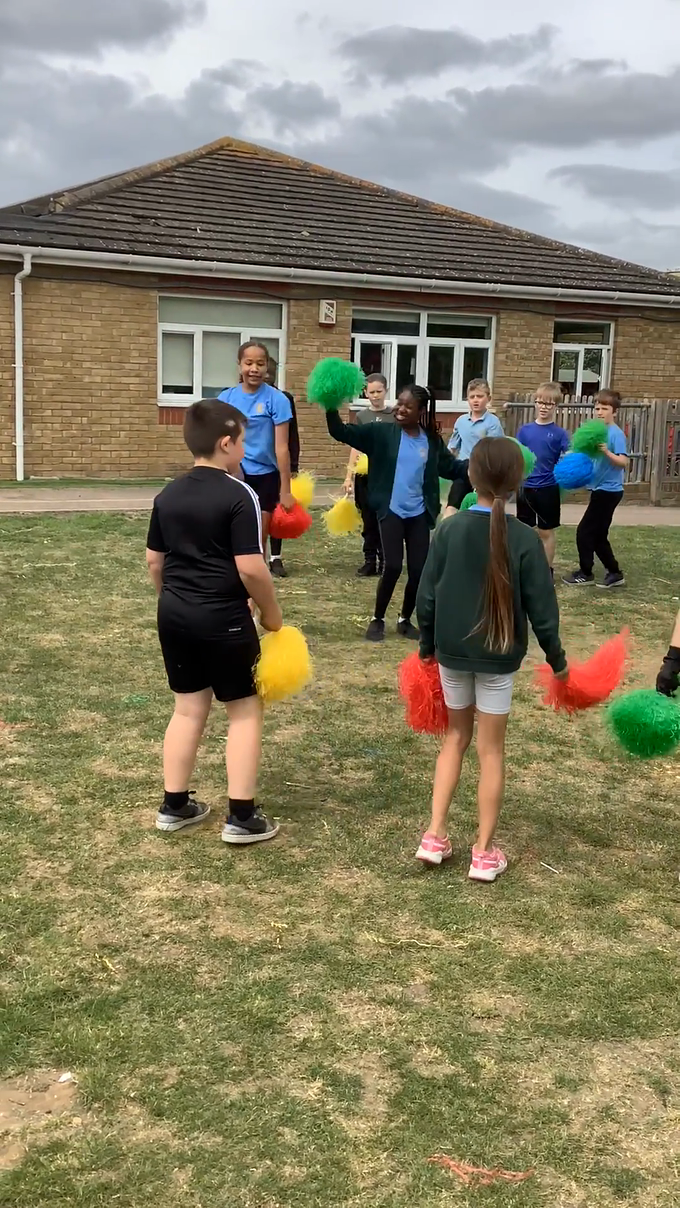 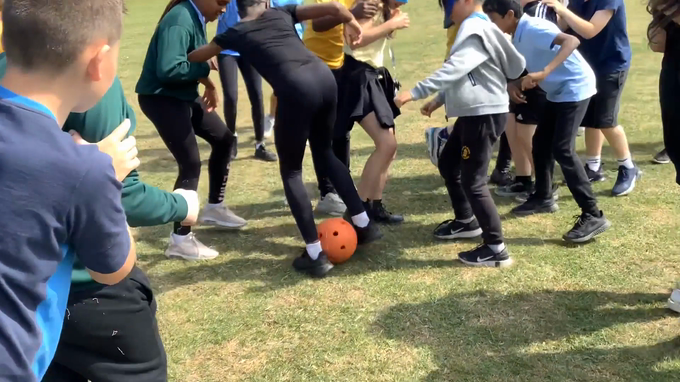 On Friday, our year 6's took part in a range of different sports and activities.

They started the day off with catch the flag, which became rather competitive amongst the houses! Then in their houses, they completed a range of activities from volleyball to golf to bucket toss to cheerleading (which seemed to be rather popular!). Each house has created a cheer dance and the school are currently voting for the best one!

During the afternoon, they took part in blind football which was great to see all year six get involved.

Collaboration to perseverance to imaging are just a few of the BLP's used over the day.

On Thursday 26th May, some of our year 3 and 4's represented the school in a Soccer Six Football Event held by Dartford FC. The team were amazing and showed great sportsmanship during the event. The team won every game they played!

Mykala was a trophy winner for outstanding player 🏆 Mykala will be receiving her trophy during our worship after half term.

Yesterday saw twelve of our netballers take part in a friendly match. Unfortunately, when we arrived the weather was not on our side so we played a couple of games of bench ball. Both schools won a game each. Eventually, the rain stopped and the sun made an appearance so we could at least have a short game of netball. The first half saw no goals but great defence from both schools. The second half saw New Ash Green score two goals - despite Stone's best effort.

Well done to all of those that took part!

Monday saw our Sports Week start with a few hip hop dance moves. All year 2 and 6 classes had a ball learning some new moves and performing to one another!

Unfortunately not the ones with chocolate chips.

Some cookies are necessary in order to make this website function correctly. These are set by default and whilst you can block or delete them by changing your browser settings, some functionality such as being able to log in to the website will not work if you do this. The necessary cookies set on this website are as follows:

Cookies that are not necessary to make the website work, but which enable additional functionality, can also be set. By default these cookies are disabled, but you can choose to enable them below: